Every year, I plan to sew up at least a few Christmas gifts … and most years I don’t finish all that I have planned. Anyone else? No? Just me? This year, I jumped on board with Sewing by Ti‘s Celebrate the Holidays Tour, so I’d HAVE to finish the shirts I planned for my kids’ presents. LOL

I’m happy to say that I did manage to finish all five Parker’s Vintage Fit T-shirts for my kids, as well as four Parker’s T-Shirts for my Godchildren (which I even had done early enough to mail to Florida). These 9 shirts were quite the task for me on top of sewing matching PJs for my mom’s 10 grandchildren (my 5 plus their 5 cousins) and the cardigan I sewed for my mom’s present. I’m pretty sure this was the first year ever that I finished all the sewing projects I had planned! Yay! 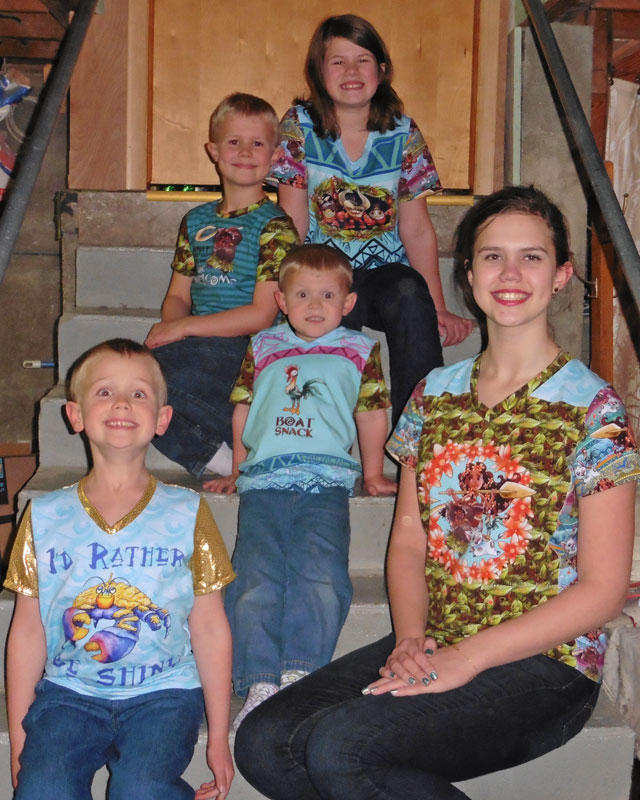 I don’t know about everyone else’s children, but my 5 are still enthralled by the movie “Moana.” So when I saw that BackStitch Fabrics had a box set of child-size “Moana” panels plus 2 coordinating fabrics, I snatched two sets when they went up for retail to make shirts for my children and Godchildren. The set only had 4 different panels, though there was an extra Maui panel thrown in since the company had an abundance of them, so I figured I would just make two of my boys matching shirts. Then I saw that Jaded Threads Shoppe also had some “Moana” fabrics, inlcuding a Tamatoa panel, who is my middle son’s favorite! So I bought an adult size panel in order to use the extra length for the back of the shirt. 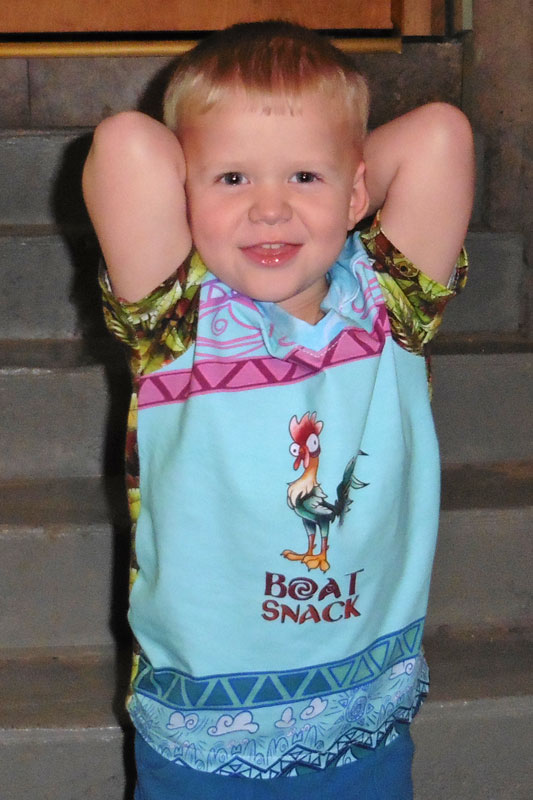 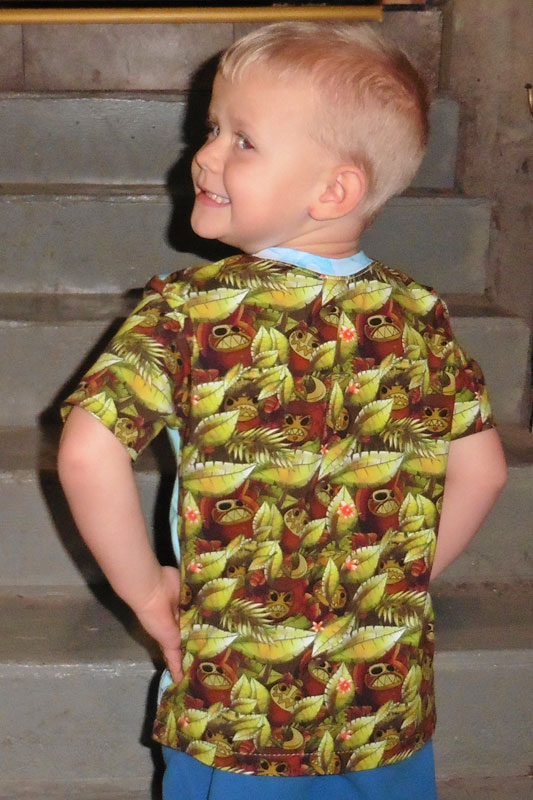 My youngest son loves Hei Hei because “he’s a chicken that eats a rock and that’s funny!” I made him a size bigger shirt than he measures in the size chart since I’m expecting a growth spurt soon. The “Boat Snack” panel was just a little shorter than the size 6 Parker’s T-shirt pattern, so I used a small piece of scraps from the Tamatoa panel for the bit of color-blocking needed at the shoulders (sorry it’s not easily visible in my pictures, but it’s just like the girls’ shirts) and for the neckband. The sleeves and back were cut from one of the coordinate fabrics, which features the Kakamora characters who my son also loves. 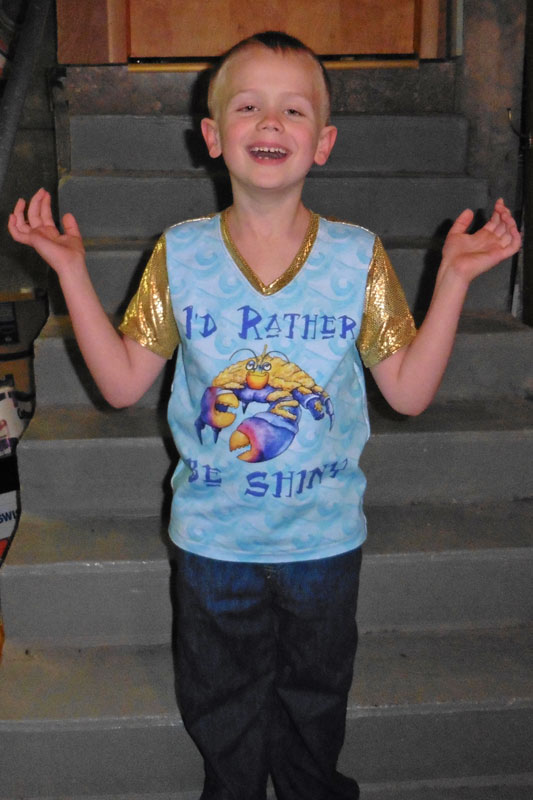 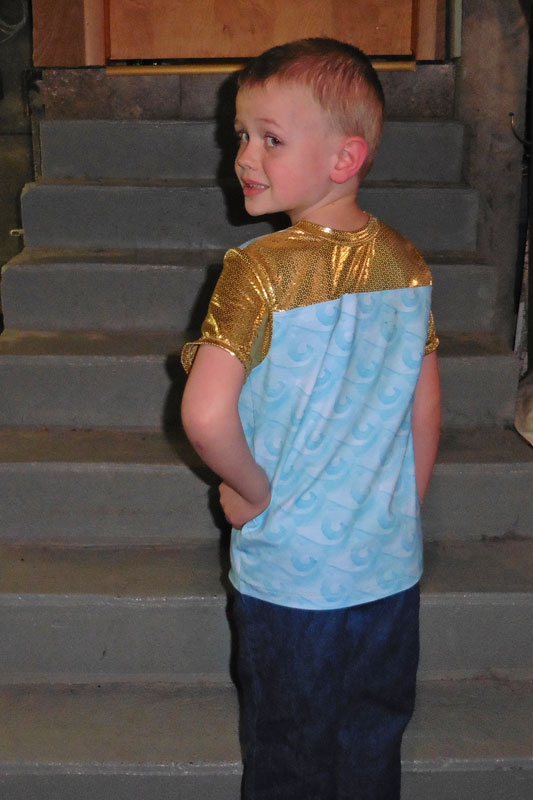 My middle son’s favorite song from “Moana” is Tamatoa’s rendition of “I’d Rather Be Shiny” so I HAD to buy him this panel when I saw it for sale from Jaded Threads Shoppe. Like I mentioned above, I chose to buy the adult size panel in order to have extra fabric for the back of his shirt … turns out, it came in handy for color blocking the fronts of most of the other panels, too (I used it on all except the 2 Maui shirts I made). After cutting the front of his shirt with the graphic placement where I wanted, I was just a couple inches short of having enough length of fabric for the back. Rather than use the coordinate fabrics from the BackStitch Fabrics set, I pulled out some fabric from my stash (I think it originally came from JoAnn, but I bought it a few years ago) that looks like sequins but is printed on the fabric rather than actual sequins. In keeping with the shiny theme, I used that for his sleeves and neckband and to color block a yoke across his shoulders. My husband raised his eyebrows at the shininess, but my son LOVES it!! 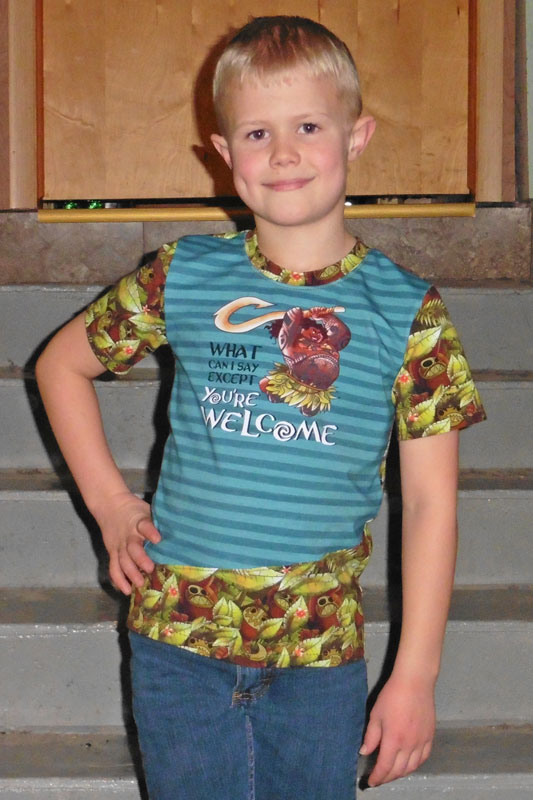 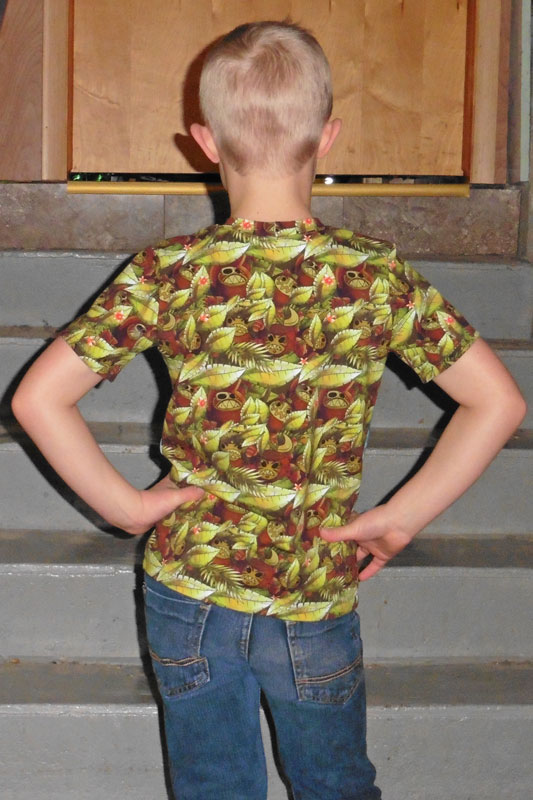 My oldest son always thinks he’s the toughest and best at everything, so the Maui panel was a fitting choice for him. I added an angled color block line on the bottom of his shirt front because the panel was not quite long enough and I thought the angle would add some interest. The color block, sleeves, back, and neckband were all cut from the Kakamora coordinate fabric. 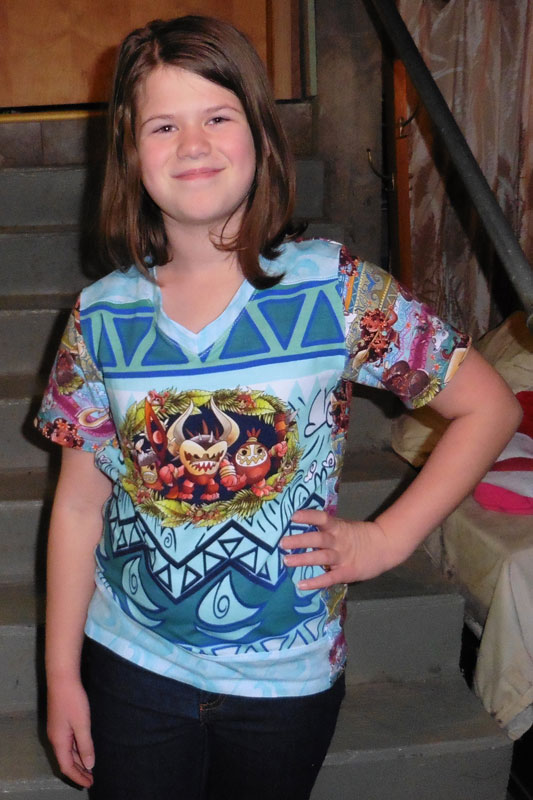 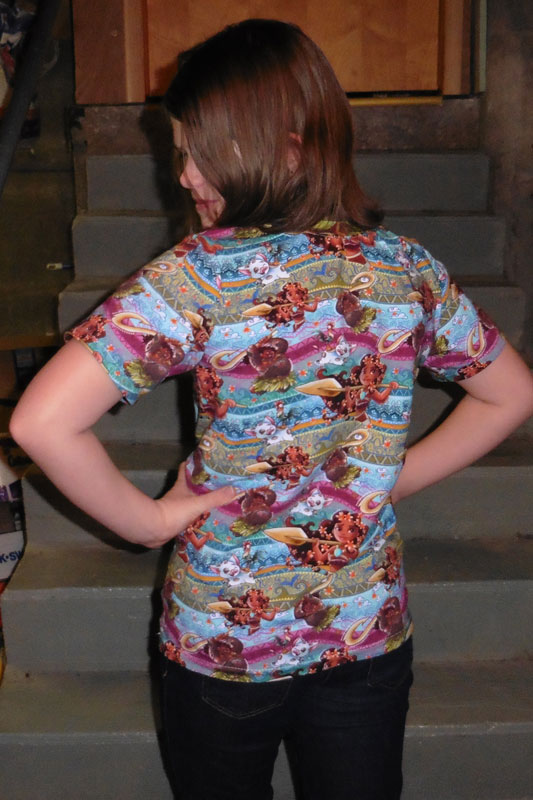 By default, my younger daughter got a shirt made from the Kakamora panel, which she wasn’t thrilled about until I pointed 0ut that I mailed a matching one to my Goddaughter who is one of her best friends. 😉 In order to cut a size 14 shirt using the child size panel, I needed to color block all 4 sides of the panel. I added length to the bottom hem and to the top of the shoulders using scraps from the Tamatoa panel (which is what also what I used for the neckband), then added to the sides using the same coordinate that I used on the sleeves and back of the shirt. 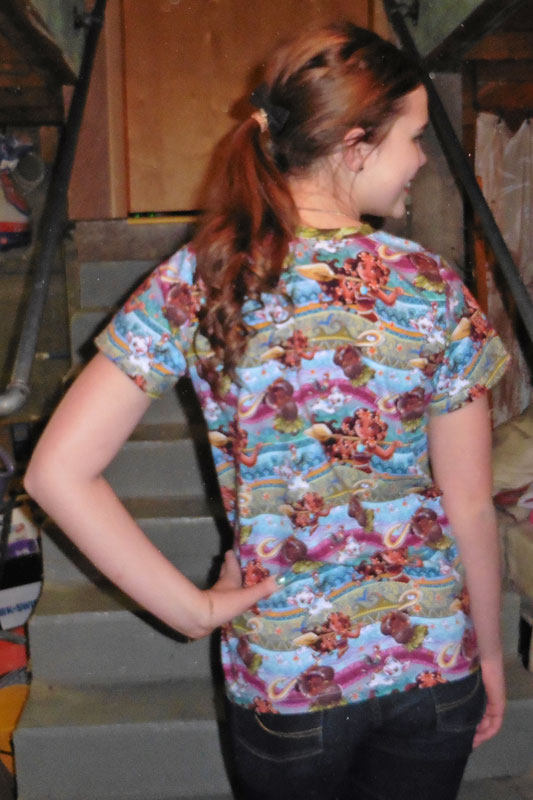 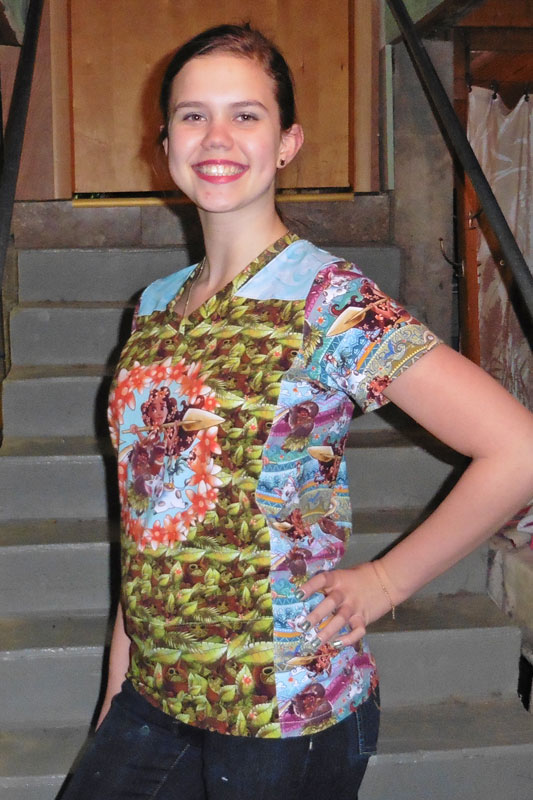 My oldest daughter fancies herself a princess and is always singing “How Far I’ll Go” so I made her shirt from the panel that featured Moana. Her bust measured just above the size chart for a size 18 Parker’s T-Shirt, so I compared to the finished measurements and decided to just go for it since she’d rather have a slimmer fitting shirt anyways, though I did add 5 inches length at the bottom since she stands 5’11” barefoot(!!). I color blocked the top of the shoulders using the last of the scraps from the Tamatoa panel, then added the Kakamora coordinate fabric to the bottom of the panel since it blended with the panel so well. I also used the Kakamora fabric for the neckband, but chose to cut the sides of the front, the back, and the sleeves from the second coordinate fabric. I was a little worried that my moody pre-teen would think it was too childish looking, but lo and behold she loves her new shirt just as much as the rest of my kids! Hooray! 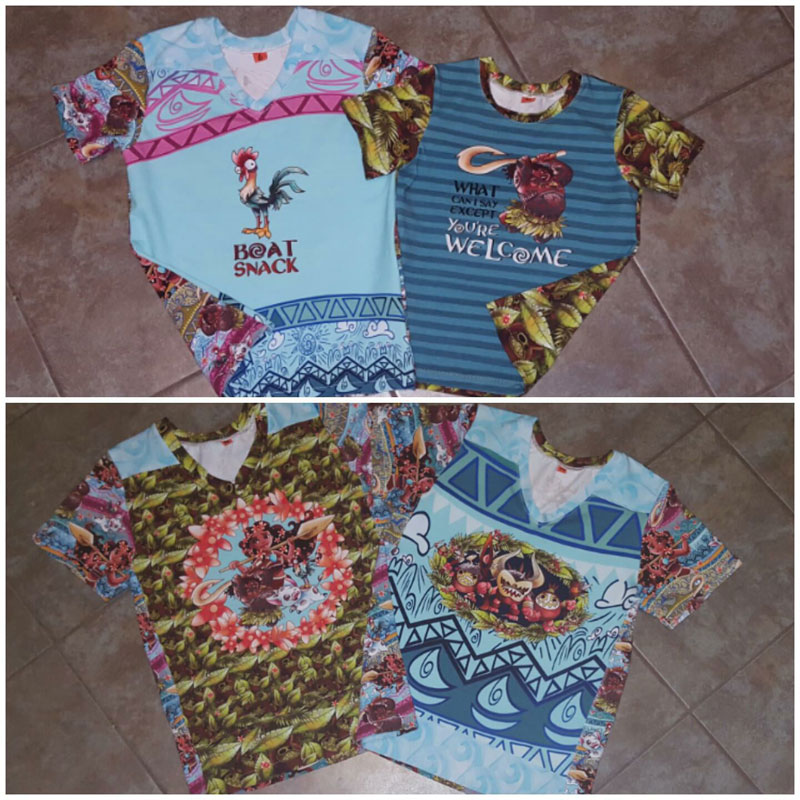 I don’t have any modeled photos (yet) of my Godchildren’s shirts, but I did remember to snap a couple pictures before wrapping them up and mailing them to Florida. The older two girls match my girls in color blocking. My younger Goddaughter matched my youngest son (since they’re about the same size) except I used a different coordinate for the sleeves and back to make hers girlier. Finally, my Godson’s shirt (almost) matches my oldest son except he’s smaller so didn’t need the bottom color block. I figured they’d love matching since they get along so well every time we visit. 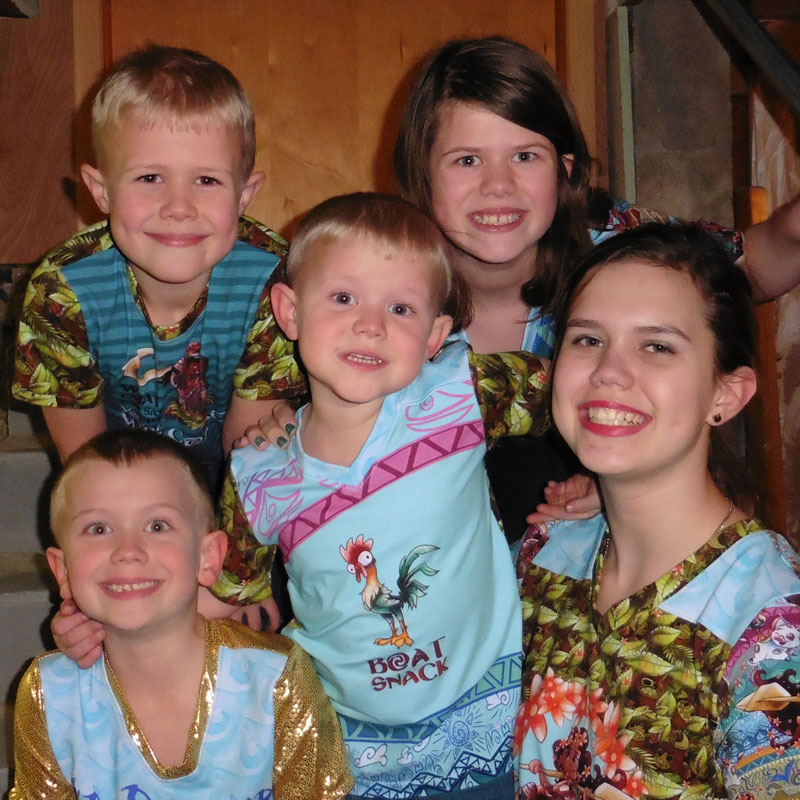 I was so glad I signed on to join the Celebrate the Holidays Tour, since it gave me the kick in the pants I needed to finish all my projects this Christmas.

P.S. I hope you don’t miss any of the stops on the Celebrate the Holidays Tour! All of these bloggers have posted some amazing projects and inspiration. This year’s season may be about over, but it’s never too early to get started for next year!! 😉 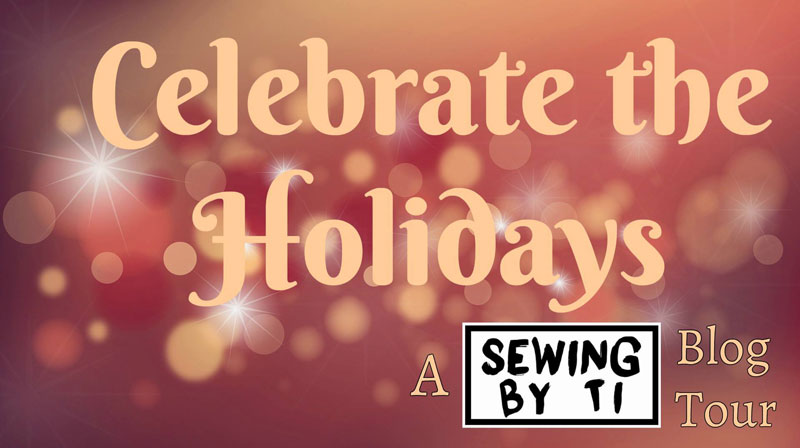