I try my best not to limit my kids from any clothing that they want on the basis of gender stereotypes. I may not take my boys out shopping while they’re wearing princess dresses, but I darn sure am not discouraging that imaginary play when we’re at home (just yesterday my youngest came into the kitchen wearing his sister’s pink tutu over top of his Hulk costume from Halloween).

My oldest son used to proclaim that pink was his favorite color and we went with it and encouraged him to like whatever color he wanted. Sadly, when he went to school someone made a comment about pink being a girl color and now he won’t claim liking it at all. Although he won’t admit it, I’m pretty sure that he still does like pink so I was anxious to hop on board when I heard about the Boys Can Wear Pink Blog Tour. I knew my oldest boy would wear a pink shirt (especially if I made it for him) … and what kind of sewing mama would I be if I left out his little brothers?!? And so I bring you my contribution to Season 3 of Handmade Boy’s Boys Can Wear Pink Tour. 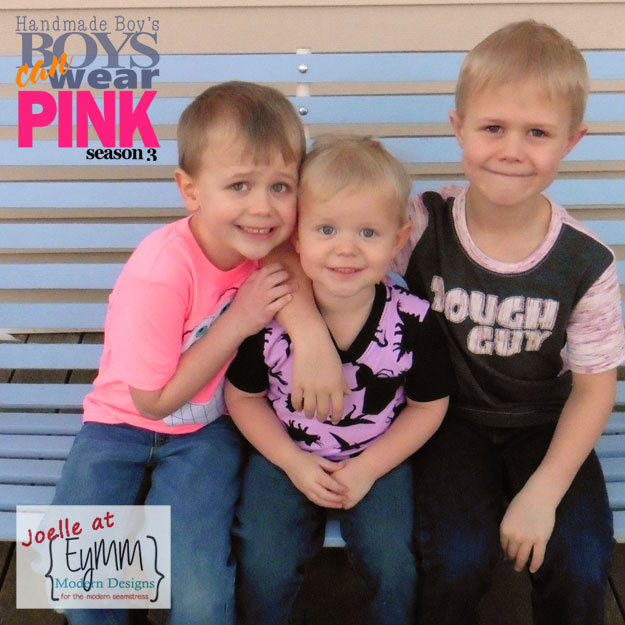 After signing up and deciding that all three of my boys NEEDED some pink in their wardrobes, I began thinking about how to best incorporate it to fit each kid’s personality. My oldest boy is constantly challenging anyone in the house to “fight” him (mostly play fighting … mostly, lol), so I decided he should have something befitting of the self-proclaimed “toughest boy in the house who’s not Daddy!” (Yes, he actually says that … usually several times a week! LOL) 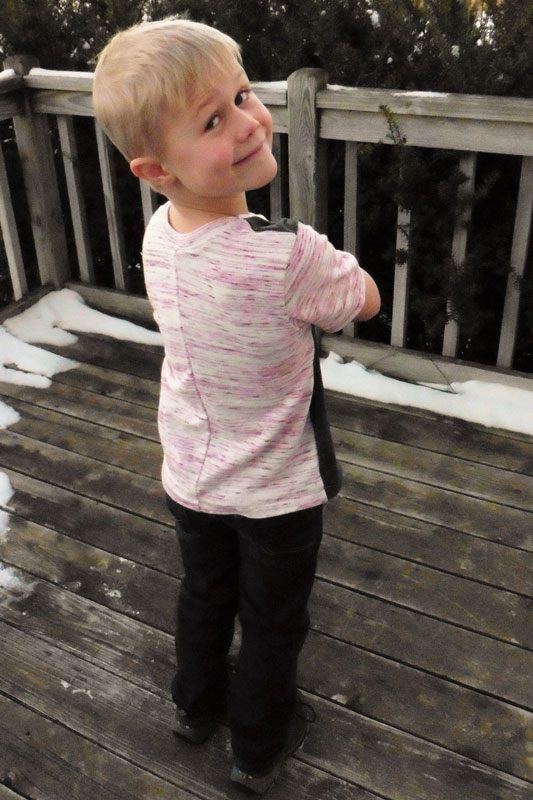 I found some pink striated french terry joggers in my “to upcycle” pile and decided to pair it with dark grey to create a one-of-a-kind pink Parker’s Vintage Fit T-shirt. The leg of the pants wasn’t quite wide enough to cut the size 7 shirt body without using the side seam, so I incorporated it up the center back as a design element. After cutting the back and sleeves, I used some scraps to applique “Tough Guy” on the grey cotton/spandex front … because, duh, only tough guys wear pink, haha. He’s thrilled with his shirt because, not only is it pink, it still looks “tough.”

The funny part about his claims about being the toughest is that it is so true. Not only is he the oldest boy, besides his dad, but our standard discipline for his misbehavior is giving him a number push-ups to do. My husband started this after trying multiple other “punishments” to no avail. This boy’s wildness would not be quelled, so we set out to channel his activeness. Giving him something physical to do as a consequence for showing disrespect or for other transgressions has been an excellent way to get him to focus on being a better person. As a side effect, the boy has gained not only some self-control, but he has some defined muscles in his arms and can easily hold onto the “toughest boy who’s not Daddy” title, despite his brother almost catching up with him in size. 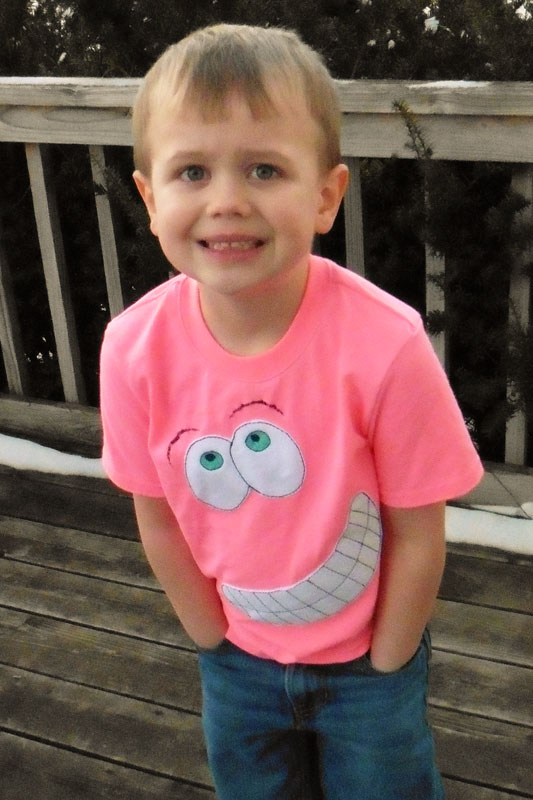 My middle boy is, for the most part, my entertainer. Don’t get me wrong, he’s got a temper that can stop you in your tracks, but he’s usually pretty happy and silly (don’t mind his expressions in the photos … he is also my biggest complainer about the cold and it was only 33*F when we braved the outside for a quick photo shoot). So, anyway, he has this green store-bought shirt in his drawer that has a big goofy face on it that matches his personality perfectly. He wears it so often that the image is starting to wear off, so I thought maybe he would like a replacement. I apparently hit that nail on the head because when I suggested a new smiley face shirt, my son’s face lit up. We sat down at the computer together and Googled smiley faces and I let him pick whichever one he wanted to recreate on his new shirt.

I plucked a neon pink men’s t-shirt from my “to upcycle” pile and incorporated the existing hems as I cut the body and sleeves down to a size 6 using the Parker’s Vintage Fit T-shirt pattern. I even seam-ripped the neckband off the original shirt to cut it down and re-use on the new one. Before sewing the shirt together, I added the face to the front of the body. My son was sure to instruct me that it had to be “just like the smiley picture.” So I printed out the smiley and pinned it to the shirt front, sandwiching white cotton/spandex between the paper and the pink shirt. (Shhh … don’t tell him, but I cut the paper between the eyes and mouth in order to spread them apart a bit and take up more of the shirt front.) Once the layers were pinned, I simply stitched over the outline with a triple stretch stitch, tore the paper off the top, and trimmed the excess white fabric from around the outside of the eyes and teeth. I zigzag stitched with varying width to create the eyebrows and then used fabric markers to color in the eyes’ irises and pupils. My son is thrilled and can’t wait to wear his new pink shirt to Pre-K next week! 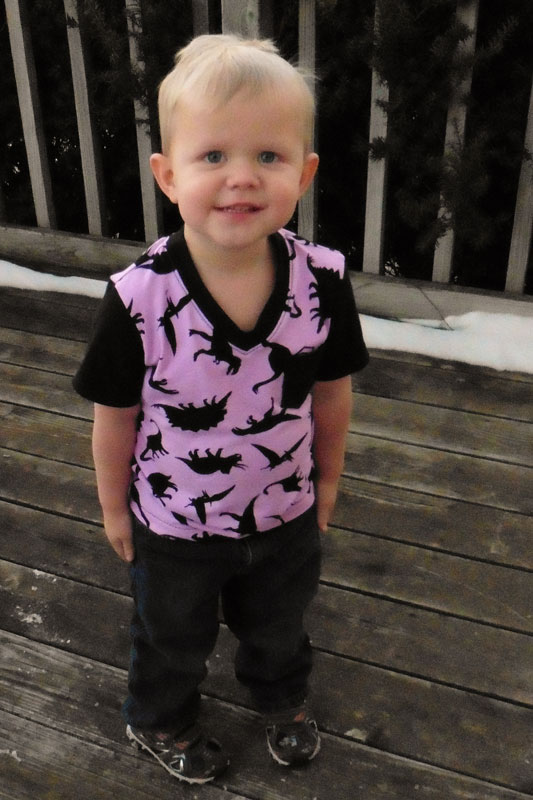 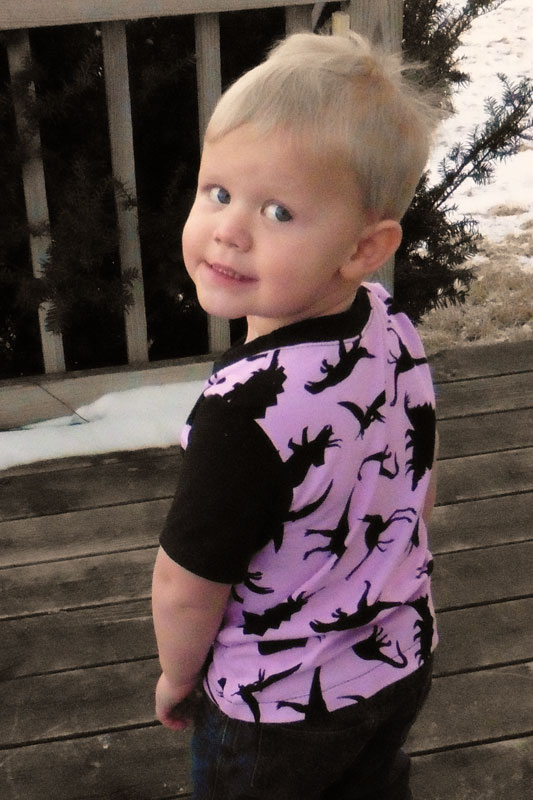 My “baby” boy (I can hardly believe that he’s 3.5 already!) loves all things typically labelled “boyish” … trucks, trains, dogs, and DINOSAURS! So when I signed up for this blog tour, I knew it was time to pull out the black and white “Rawrsome” dinosaur print knit that I bought from Sincerely Rylee way back in May 2016. I cut out a size 4 Parker’s Vintage Fit T-shirt, choosing the v-neck and chest pocket options to make his pink shirt a little different from his brothers’ shirts.

Before constructing the shirt, I threw the front and back into a sink filled with hot water and pink dye. I was a little disappointed in the light shade that the Tulip brand pink dye left the cotton/spandex, but it was the best I could buy locally (because I was short on time and I remembered that my RIT-dyed California dress is still bleeding color nearly a year and a half after making it). I think I’ll try dying his shirt again with a different brand to attempt a deeper color of pink, but that will have to wait for another day. For now, my littlest boy is excited to have a pink dinosaur shirt … no matter what shade it is!

P.S. I love that this tour has pushed the boundaries of gender sterotypes and gotten pink into so many boys’ wardrobes around the blogosphere. If you haven’t already been following along, make sure you visit all the stops on the Boys Can Wear Pink Tour! Also, don’t forget to enter the Rafflecopter below for a chance to win Friday’s Prize Package! 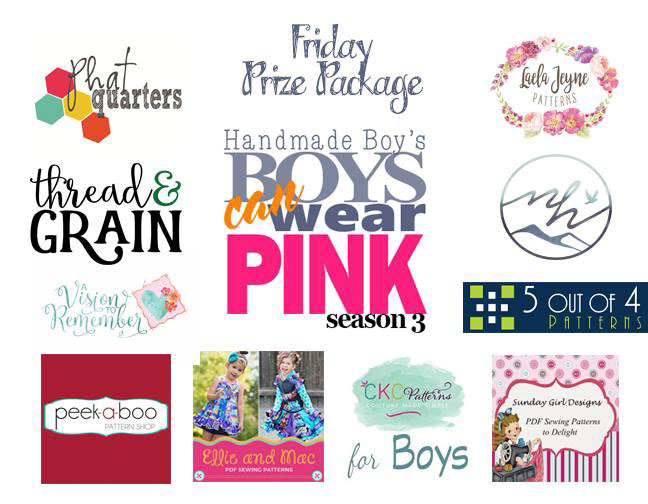